Unless you grew up on a desert island where there were no toys, it’s pretty much guaranteed that at least once in your life you’ll have built something with Lego bricks. The connectable plastic bricks originate from Denmark and first hit the toy market in the late 1940s. Over the decades the simple building brick has been developed into very sophisticated toys that are educational as well as entertaining with packs that also includes many different jointed mini figures. There are now several Lego imagination centres around the world, theme parks based on Lego and even films where the popular figures are the stars of an animated story.

We’d be the first to agree that our Lego Man entertainer differs from the original mini figure in two ways. Our Lego Man entertainer is quite a lot bigger than the average minifig you’ll find in a box of Lego bricks and as you’ll quickly discover when you hire him, there’s nothing plastic about our Lego man entertainer either. Our Lego Man entertainer is one hundred percent genuine, we discovered that for ourselves when we did his background checks. Even though his face will be covered, that means you won’t need to worry about who is inside the red, blue and yellow Lego Man costume he’ll be wearing. He’s a straight up guy with professional acting qualifications and certificates for working with children.

Our Lego Man entertainer knows just how to duplicate those jerky Lego Man movements and can do them to music too. The kids will have a great time joining in with him doing that as well as doing Lego building challenges such as building the tallest tower and creative constructions, Lego Relays, Lego Bingo, Pin the Head on Lego Man, a Guess How Many Bricks challenge, Balloon Twisting, Bubbles, Limbo and Musical Games. Our Lego Experts will bring along everything needed for the entertainment including the Lego, Music, and Slap Band Prizes for all the children. Our Lego Man’s Lego themed entertainment will keep them well and truly amused the entire time he’s there. All you’ll need to do is concentrate on not burning the sausages and burgers on the barbie until the kids are ready to tuck into the birthday party feast.

We can also create themed party invitations that we can send to you, just contact us to find out more!

If you want to hold a Lego Man themed character party for your child’s birthday, enquire today about hiring our Lego Entertainer and you’ll be building some happy memories for your little one. 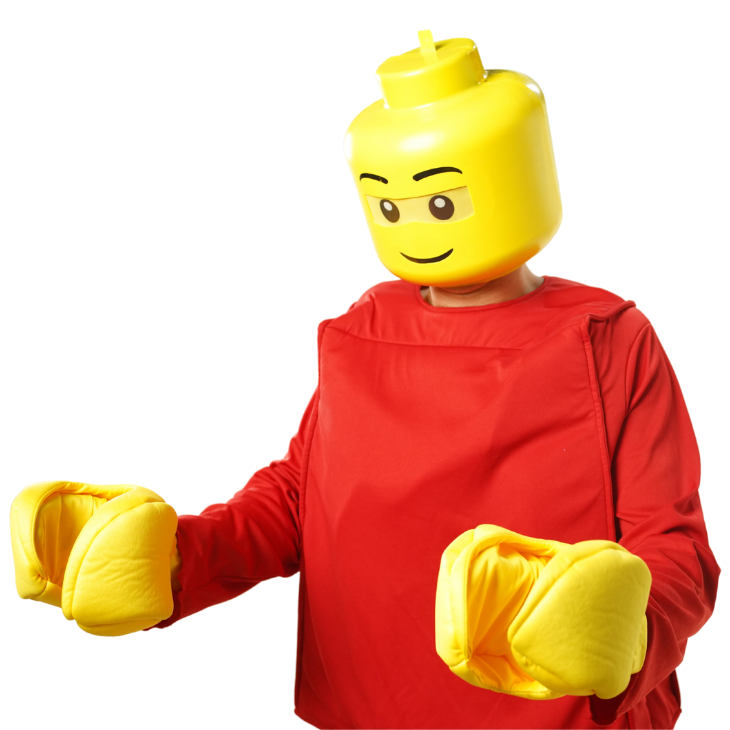